Divya Sharma reported via Reuters from Asia that manufacturers of electrical products forecast strong 2011 revenue growth.  This comes on the heels of strong fourth quarter results in the sector.

Reuters also reported that Teledyne, the electronic components maker, posted a higher quarterly profit, boosted by higher sales at its electronics and communication unit. Teledyne also said it would “focus on its core electronics, instrumentation and engineering businesses after selling its aviation products business to an unnamed international buyer.”  Interesting on a few levels, not the least of which is that the company sold its aviation products business.  This was announced on Dec. 14:  Teledyne would sell its general aviation piston engine business to Technify Motor (USA) Ltd., a subsidiary of AVIC International, for $186 million in cash.

Headquartered in Beijing, In 2009, AVIC International has consolidated annual sales of approximately $6 billion. AVIC was formerly known as CATIC International Holdings. It’s an investment holding company. AVIC aviation customers include Boeing, Airbus, Snecma and Honeywell, says its press, but then, everyone’s customer base includes Boeing, Airbus, Snecma and Honeywell to some degree so that doesn’t really tell us much. (I don’t mean to be cynical, just realistic: those are the most comprehensive supply chains out there.)

AVIC being a China-based holdings company is also interesting.  We should get used to seeing that. China is more economy than e-waste these days.  The electronics aspect of this is the tip of the iceberg.

In a video recently circulated by a manufacturing magazine Economist Martin Jacques discussed China’s likelihood of taking over as the world’s dominant economy by 2050. 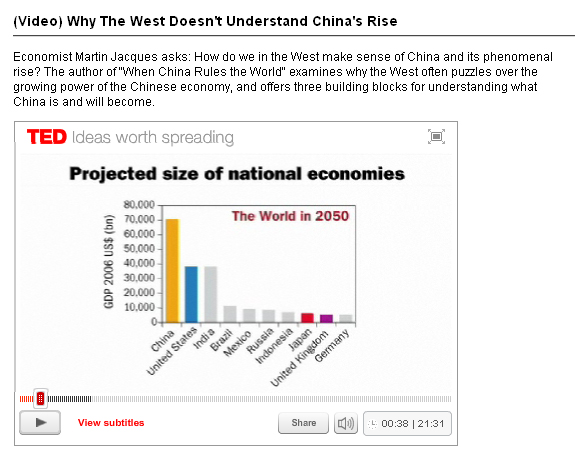 Jacques showed that Goldman-Sachs said that by 2027 China’s economy would be twice that of the United States.  But then he said that this projection has been adjusted, due to the recent global economic tumble.

Now, says Jacques, updated forecasts indicate that China’s economy will be larger than that of the United States by 2020.  That’s less than 10 years from now.  That kind of thing can improve your posture quickly.

China from the inside out
The video is worth watching.  Jacques goes on to identify three “building blocks” to understanding Chinese culture and how it is different from our own culture.  He also says that contrary to popular belief, Chinese culture will not become more like Western culture as it becomes more modernized and successful.  In fact, we need to become educated quickly on how their culture ticks so we can more accurately predict and understand market behavior.

According to Martin Jacques, Chinese thought is critically different from Western thought in the Chinese firm notions of:

Jacques’ point is that we’d better start understanding Chinese culture now because they’re going to be boss soon. He wrote a book about it called “When China Rules the World: The End of the Western World and the Birth of a New Global Order.” A good read if this sort of thing interests readers as much as it does this blogger. (Do we have a choice but to be interested?)

A very informed review of the book in the New York Times provides this perspective:

As China finds its own path economically, it is unlikely to look west for political advice, Jacques suggests. Its ruling Communist Party, having largely set aside its socialist ideology, has become a modern version of an imperial dynasty. China’s Communist leaders have flirted with reviving Confucianist thought, positioning themselves as protectors of Chinese unity, the state’s traditional role. Many Chinese see that mission as sacred. Jacques argues, credibly, that most Chinese will back their leaders, with or without democratic reforms, as long as the country keeps getting stronger.

So how might the world work under Pax Sinica?  Jacques ventures some fascinating guesses: The United States often promotes democracy within nations. China insists on democracy among nations. If the power of countries in the international arena were determined by how many people they represent, China would have more clout than all the Western democracies combined. (source: Joseph Kahn, former Beijing bureau chief and deputy foreign editor, The New York Times)

So when Reuters reports on the elevating electronics market – and immediately we’re talking about Chinese holding companies – it really should come as no surprise at all.

As the next few years tick by, we’ll want to understand what’s happening in China more from the inside out. Which is why voices like Jacques, Kahn and others are so very important to the manufacturing industry and supply chain management, starting right now.