Good news: Boeing will continue assuring a worldwide supply of C-17 aircraft, the giant behemoth aircraft with payload potential of over 85 US tons (pictured below). All this is possible via a $2 billion follow-on contract from the U.S. Department of Defense.

Boeing supply chain size. According to a Boeing internal document, Boeing had reduced its sprawling supply base to 6,450 suppliers in more than 100 countries (see gray box “Suppliers by the numbers”) in 2005. The supplied parts are (or were) organized as depicted in the image below, which is interesting even if it’s dated material: here’s how a product supply chain can be blocked out: 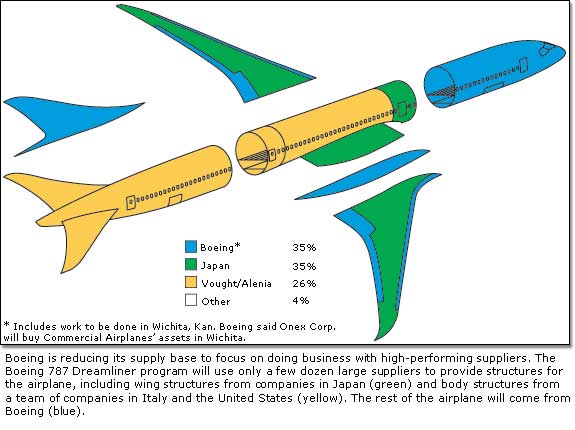 Take a look at the more specific 787 supply chain, sourced from the APICS blog and copyright of Boeing:

The 787 supply chain consists of 325 suppliers for one airplane. And the supplier relationship model is different.  The model takes Boeing’s well-touted supplier-partner roles a step closer to a true partnership.

“There will be only a few dozen large suppliers [on the 787 program] and they will carry a greater responsibility than on previous commercial new airplane projects,” Walt Gillette has said. Gillette of course is the esteemed former 787 program vice president of Engineering, Manufacturing and Partner Alignment.

Suppliers on the 787 program were not just consulted on how to improve current systems or components they provided, they were sharing risk by participating early in the design-build process.

This model seems to have worked and is fuel for thought for the rest of us.