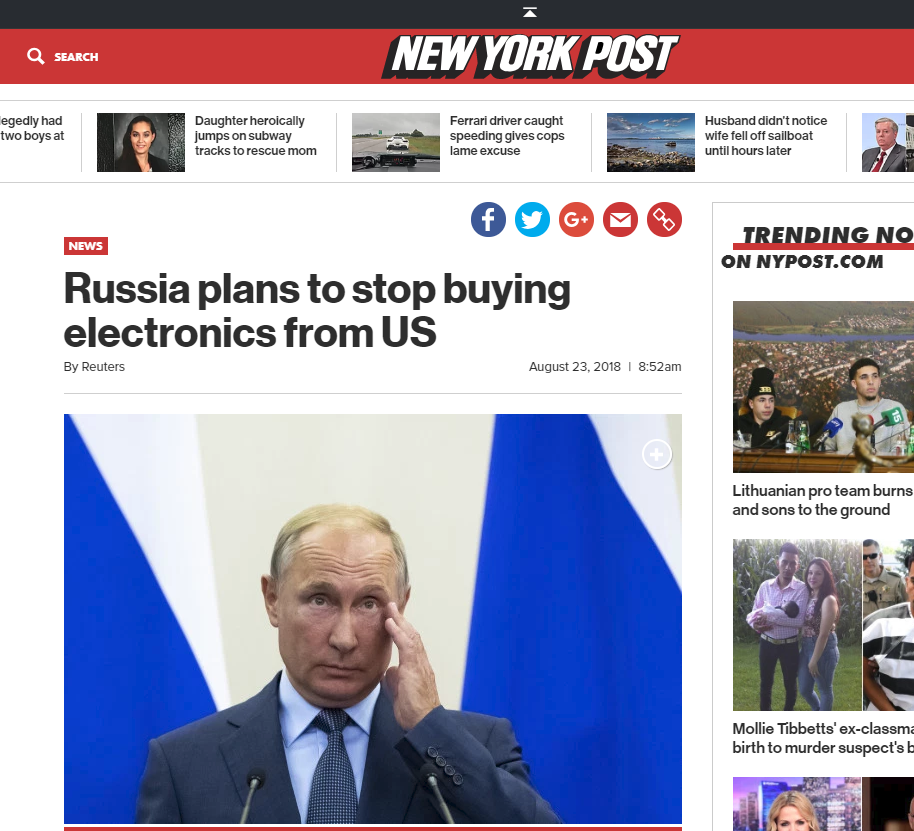 Wait … Russia plans to stop buying electronics for military use from the US? What about ITAR?

In my January editorial I asked, “Absent a government-industry technical agency, is the US shooting itself in the foot?” My comments were made in response to a former Bell Labs researcher who wrote that the US should consider reestablishing a government-supported technology research center.

A couple days ago in the Boston Globe, MIT science historian Loren Graham, an expert on Russian technology, points to how scientists there have led the way in everything from electric lights to fracking to the laser, none of which they were able to commercialize and thus take advantage of domestically.

Graham points to many reasons for this, specifically the Russians lack of a robust legal, political and economic system that would provide the necessary infrastructure and protections. But interestingly, he is convinced that individual mores are also to blame, saying, “In the Russian scientific community, the belief that business is dirty. And that you should not demean yourself by stepping out of the world of ideas.”

Some in the US are concerned that the pressure of competition might actually stymie ideas. It seems our counterparts in Russia may share those concerns.

So much for the idea that, for niche EMS companies, proximity to customers counts. This company’s nearest client is 1,700 km (1,062 miles) away.

What’s more: their factory is located above the Arctic Circle.

Timing is everything, isn’t it?

On the same day IPC named an official representative for Russia, calling it “a market with enormous growth potential,” a leading research firm basically threw in the towel on Putinland.

“Russia now is facing a cessation of new investment, along with shutdowns in existing facilities and delays in new ones,” iSuppli said in a press release today. The firm pointed to aborted attempts by Foxconn, Flextronics and others in trying to get operations there up and running, and noted that while Elcoteq has been building in the country for years, its investment there has been so unprofitable, the telecom EMS tried in vain to find someone to dump it on and finally decided to shut it down.

In its announcement of Yury Kovalevsky as its official representative to Russia and Russian-speaking countries, IPC said the appointment is part of a “long-term plan to expand services and standards globally.” Kovalevsky, IPC said, will make IPC services “widely available to companies in Russia, a market with enormous growth potential for both electronics manufacturing services and printed board production.”

That comes as news to iSuppli.

I’m not saying one side is right and the other is wrong. By outsourcing translations and distribution of its standards, IPC can position itself to make money even if the market doesn’t materialize any time soon.

But it’s hard to escape iSuppli prinicipal analyst Adam Pick’s damning statement: “With the ongoing recession and financial crisis, however, it appears that most of the interest in penetrating the Russian market has disappeared. Furthermore, the historical record for electronics manufacturers operating in Russia has been plagued by multiple problems.”

On the other hand, in market terms, IPC is probably buying low. Like I said, timing is everything, right?