Soldering is an ancient technology. It is estimated that soldering was first discovered as long ago as 4000 BC. So soldering was much more ancient to Julius Caesar  (100 BC – 44 BC) than Caesar is to us today. Before considering soldering, let’s discuss early copper smelting, as copper is usually the metal soldered to.

My Cornell colleague Steve Sass wrote a book, Materials: The Substance of Civilization, on which I based my course of the same name on. In his book, Sass points out that the importance of the firing of clay can’t be overstated as it is the first time humankind changed the nature of a material. Once clay is fired it forms ceramic, a material much stronger than dried clay. Artisans first performed this feat about 26,000 years ago in what is now the Czech Republic.

While I agree with Sass’s assessment, it could also be argued that the beginning of modern technology can be traced back to the first smelting of copper. The firing of clay is too simple a process to encourage much further experimentation, which is needed for technology growth. The process of smelting of copper, the first metal liberated from its ore, is quite complex and this complexity led to further experimentation that gave us iron and steel. Continued working with metals likely developed the scientific method, hence led up to all of the breakthroughs to this day.

Consider the novelty of the first smelting of copper. To smelt copper, our ancestors had to grind copper ore, malachite (Figure 1), into a powder, mix it with carbon, and heat it to greater than 1085ºC (1985ºF). By the way, you can estimate the Fahrenheit temperature by multiplying the Celsius temperature by a factor of two and will only be off by <10% from 100º-1700ºC.

Figure 1. Malachite (copper ore) is quite attractive. Perhaps this attractiveness brought it to our ancient ancestors’ attention as a candidate for smelting. (Copyright 2018, Ronald C. Lasky, Indium Corp.)

After I cook on my outdoor grill, I clean the grates by turning the propane to maximum to cook off the grease. Typically the grill’s thermometer will read about 600ºF during this process. The grill gives off so much heat that it is oppressive to approach it to turn it off. Needless to say, noting what 600ºF feels like suggested to me that it is very hard to achieve 1985ºF with a wood or charcoal fire.

Anyway, I recruited some graduate students to try and smelt copper as described above. They purchased many bags of charcoal, used a leaf blower to supply air and worked for two hours on two different attempts and failed both times. The next year some students built a tower with vents and put charcoal on the bottom with the copper ore and carbon in a crucible on top. Their tower was similar to a roman smelting furnace for iron (Figure 2). They were successful and produced a piece if copper about the size of a penny. 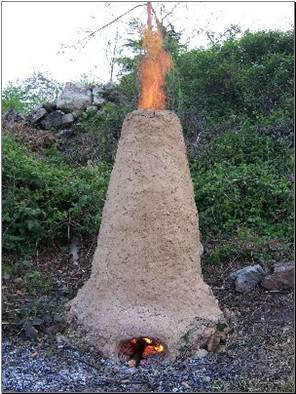 These two attempts demonstrate how amazing our distant ancestors were. How did they think to do it? There were certainly many failed attempts. How did they persevere? One thing is certain, they started the trend of discovery, in about 5000 BC, that led us to today. We owe them much.