As mentioned in our last post, robots were a huge part of Productronica this year. Check out some of the video footage at the CIRCUITS ASSEMBLY YouTube channel.

Benchmark’s fascination with robots is paying off not just on the assembly line but with attracting new customers, too.

The EMS company yesterday announced a deal with KeyMe, a maker of automated key-cutting kiosks that will be first deployed in 7-Eleven stores across the New York City area.

The technology itself is neat: The kiosks enable customers to scan and store a digital copy of their keys to enable the creation of a spare copy at a later time eliminating the need for a physical key in order to make a copy.

KeyMe was very clear that Benchmark’s experience with robotics played a role in winning the program. “[Benchmark’s] extensive knowledge in automation, robotics and precision cutting enabled us to develop this revolutionary product, solving an age old problem and ensuring that consumers never get locked out again,” said CEO Greg Marsh.

Benchmark has been installing a series of interactive, programmable robots called “Baxter” designed by Rethink Robotics to perform simple tasks. The human-like machine has two arms, a head and an animated face that can display a range of emotions or thoughts ranging from “I understand” to  confusion. Benchmark uses them for packaging, testing and sorting.

While Baxter isn’t ready for the precision of the SMT line, at $22,000 per unit, he is very affordable. Benchmark not only uses the Baxter series, the EMS company builds them too.

Now, it would appear, Benchmark has gone the next step to leverage that knowledge toward building a new, industrial customer base. As its dependence on IBM wanes, this is an important development.

In summary, does the legal system need to adapt to adjudicating cases where artificial intelligence-run machines make decisions based on their own reasoning, as opposed to faulty programming? (Think HAL in 2001.) Some are arguing that robots with full autonomy “can and should be held criminally liable” for their actions. It other words, malice or intent aren’t at issue, but the action itself. 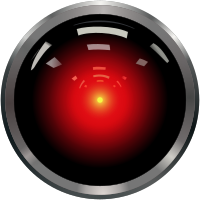 HAL is watching us. Do we need to watch HAL?

Great article on the influx of robots to electronics assembly. What’s important, I think, is that media concentrate not on the job destruction that goes hand-in-hand with automation, but rather the opportunities for even greater achievement.

We’ve been hanging out in Boston at the ESC show. Yesterday was a busy day with lot’s to look at and lot’s of folks at our booth. Some human, some not. The Freescale people, just a few booths down, brought along a tele-presence robot.

The little guy wandered here and there a bit. It’s a cool concept, but I think it didn’t quite live up to it’s potential. They really should have registered it as an attendee. It did have a little card hanging around it’s neck, but I don’t see why it couldn’t have had a genuine show badge. If it were me, I would have had it actually stopping by booths, talking to people and collecting goodies.

Still, it was a fun demo and, presumably, an example of Freescale chips in action.