I recently thought of the above situation in light of the “Five Ball Rule.” This rule states that the solder paste’s largest solder particle diameter should be such that at least five of these particle diameters would span the width of a rectangular stencil aperture.

See Figure 1 for the Five Ball Rule applied to circular and square apertures. Note that the ratio of solder balls is 19/25 = 76%, almost the theoretical maximum ratio. However, for square and circular apertures, the ‘Eight Ball Rule” is suggested. But, in some configurations the Eight Ball Rule may result in less solder paste — 40/60 = 62.5% (Figure 2). It should be remembered that this is just a surface area argument, not a volume argument. Solder paste is printed in volume and in this discussion we are just looking at one layer of paste.

However, the bottom line is that square apertures should be preferred over circular apertures.

The “Five Ball Rule” is another metric that SMT assembly industry leaders believe, but it is difficult to find its origin. It states that when selecting a solder paste, five of the largest solder balls should be able to fit across the width of the smallest rectangular stencil aperture. See Figure 1a for a 0.2mm wide rectangular aperture.

Typically, the largest solder ball diameter is assumed at the 90th percentile. See Figure 2. So, in this example, a type 4 solder paste would fit the five ball rule as the largest solder ball is 0.038mm. Five times 0.038 is 0.190mm, just a little less than the aperture width of 0.2mm. It should be remembered that this is a “rule.” not a “law.” So let’s say you had 4.5 balls across the aperture with instead of 5, it would most likely be OK.

Figure 1. A comparison of the Five and Eight Ball Rules

A generation ago, the advent of circular apertures to support BGA and CSP packages necessitated a new “rule.” Figure 1b shows why the five-ball rule is inadequate for circular apertures. Although five type 3 solder balls fit along the 0.275 diameter, off the diameter, there is not enough room for many solder balls.  Hence, an insufficient amount of solder paste would be printed.

For the same aperture, if a type 4 paste is used, 7 or 8 solder balls span the diameter and the amount of paste printed would be much closer to the volume of the aperture.

For a little more on this topic, see a past post.

My good friends, Phil Zarrow and Jim Hall, in their audio series “Board Talk,” were recently asked about the “Five Ball Rule”. In the comments section for this session, one listener asked if this rule, created in the 1990s, was still valid. After all, the 1990s was the era of 0603 and 0402 passives; 01005 and even 008004 passives have arrived.

First, let’s consider what a “rule” is verses a “law.” As an example of a law, consider Newton’s Laws of Motion. At everyday speeds, these laws are shown to be accurate to within our capability to measure. As we will recall from Physics 101, these laws were superseded by Einstein’s Theory of Relativity, at speeds close to those of the speed of light. However, in our everyday world, Newton’s Laws are well … laws. They are, for practical purposes, exact.

What is a “rule” then? A rule is an expression that approximately fits some empirical data or the experience of experts. Moore’s Law is actually a rule, as it is not precise. The doubling of transistor density has varied from every 18 months to every two years. That’s why I call it a rule, a very useful rule indeed!

The “Five Ball Rule” is clearly a rule. It was likely developed a generation ago by some of the first SMT pioneers. It may be backed up by experiment, but I think it was likely more a consensus of SMT industry authorities from the 1980s and 1990s.

What is the “Five Ball Rule?” It states that the solder paste’s largest solder particle diameter should be such that at least five of these particle diameters would span the width of a rectangular stencil aperture (Figure 1). 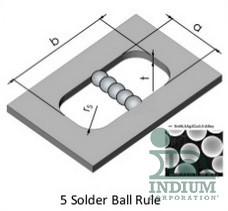 When this rule was developed, stencil apertures were much coarser than today, and the finest solder powder was a Type 3, with Type 4 on the horizon. While it is true that stencil aperture widths are much finer today, solder pastes of Type 4.5, 5, and even 6 are now in use. 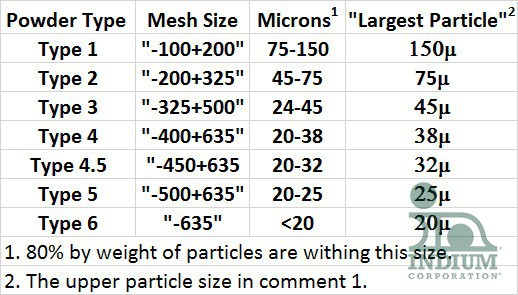 StencilCoach software now includes the newer (finer) solder powder sizes to 1) tell the user the fineness of solder paste powder for the Five Ball Rule, as well as 2) help with calculating aperture or area ratio. By the way, some have suggested that, for a square or circular aperture, an “Eight Ball Rule” is more appropriate. So, StencilCoach uses the Eight Ball Rule for such apertures.